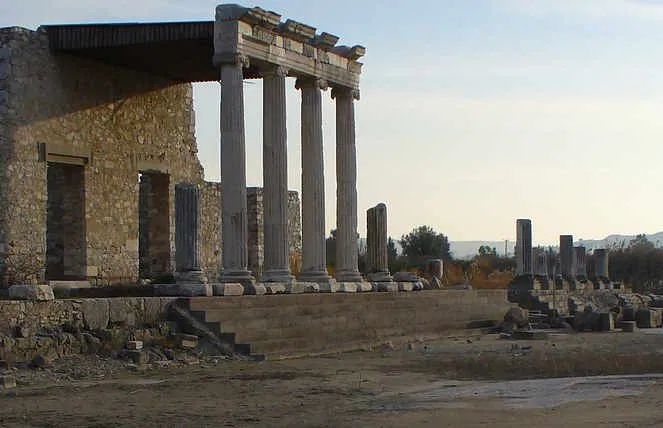 In western Asia Minor, today’s western part of Turkey, with the building of Christian basilicas in the late 4th century, wall and ceiling mosaics were adopted for Christian uses. The earliest examples of Christian basilicas have not survived. The eastern provinces of the Eastern Roman and later th Byzantine Empires inherited a strong artistic tradition from the Late Antiquity. Similarly to Italy and Costaninople churches and important secular buildings in the region of Syria and Egypt were decorated with elaborate mosaic panels between the 5th and 8th centuries. The great majority of these works of art were later destroyed but archeological excavations unearthed many surviving examples. One of the less known areas for the mosaic art is the western part of Asia Minor.

Mosaics were more central to Byzantine culture than to that of Western Europe. Byzantine church interiors were generally covered with golden mosaics. Mosaic art flourished in the Byzantine Empire from the 6th to the 15th centuries. The majority of Byzantine mosaics were destroyed without trace during wars and conquests, but the surviving remains still form a fine collection.

The great buildings of Emperor Justinian like the Hagia Sophia in Costantinople, the Nea Church in Jerusalemand the rebuilt Church of the Nativity in Bethehem were certainly embellished with mosaics but none of these survived.

Important fragments survived from the excavated sites in western Asia Minor, such as in Ephesus, Aphrodisias, Miletus and Smyrna, even though very few early Byzantine mosaics survived the Iconoclastic destruction of the 8th century.